Split-Testing Your Way to Higher Profits 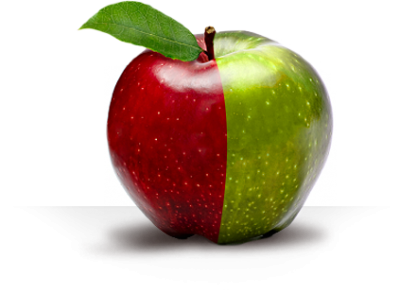 This is a guest post by Justin Clark of AdChop.com

In this post I’m going to explain why and what to test, and hopefully get you started on how to test.

What Is Split Testing?

Split testing involves testing 2 or more versions of “something” (an ad, a headline, etc) to find out which performs best.

As an example, you might test 2 different headlines on your landing page (half of your visitors see one headline, and half see the other headline) to find out which headline generates the most sales.  Once you discover which headline generates the most sales, you can start showing that headline to ALL of your visitors, and eliminate the poorly performing headline.

What Should I Test?

In a word: “Everything”

Besides headlines, here are a few other examples of the sorts of things you can run split tests on:

If split testing sounds daunting, don’t worry – you can start simple and there are some free tools that you can use to get started (I’ll mention those tools later in this blog post).

Here’s a simple example of a Facebook ad split test from a real campaign that was run: 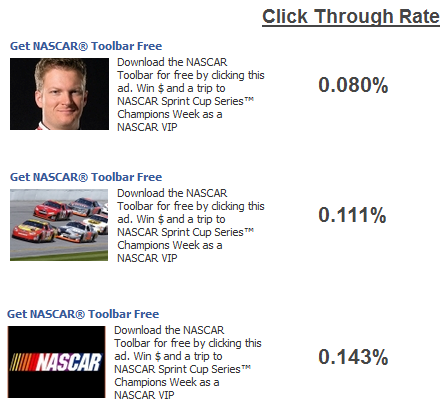 The Virtuous Circle Of Profit Growth – An Example

To demonstrate the value of testing, let’s look at a slightly more detailed example.  This example involves a bit of math, but it’s simple and worth following along:

You’re doing some pay per click (PPC) advertising to bring traffic in to your website, and 1 out of every 100 visitors to your current landing page buy your ebook (in other words your conversion rate is 1%).

Now let’s say that through some testing you’re able to double your conversion rate so that now 2% of your visitors buy your product.

At first glance, it simply looks like you’ve doubled your revenue (and you have – that’s great!).

But there’s more to the story…

Let’s say that it costs you $15 in PPC advertising to bring 100 visitors to your website.  With your original 1% conversion rate you’re getting one $20 sale for each $15 that you spend on PPC…  so your profit for those 100 visitors is $5: 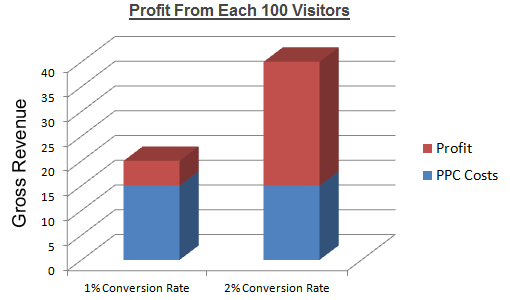 Your new higher profit margins can mean that:

In this example we’ve only looked at testing and optimizing one step in your sales funnel – your landing page.  Imagine what could happen if you also:

Combined, testing and optimizing all aspects of your sales funnel can have a significant effect on your bottom line.

What If Your Online Business Isn’t That Complicated?

What if you don’t have such a complicated sales funnel – what if all you have is a simple Adsense website, for example?  Well then for you, your testing will be simpler, but still very worthwhile.

A couple things you might want to test are:

The most worthwhile tests are generally those that compare the results generated by big, dramatic changes.

Although there are exceptions to every rule, small changes generally result in small improvements, and big changes result in big improvements.

To increase your chances of hitting a home run, test big changes!

You’ll Get Results Faster (And Cheaper)

To show you how big changes get results faster & cheaper, I’ll use an example from an advertising campaign:

Say you’re running 2 ads simultaneously to see which one gets the highest CTR.

There is only a small difference in the appearance of the two ads, and after each ad has received 10,000 impressions, Ad A has 50 clicks and Ad B has 55 clicks.

Which ad is better? The answer is, you don’t know – the numbers are too close to say for sure which ad will perform better if you keep them running.  You’re going to need to run the ads for a lot longer (and therefore spend a lot more money running them!) before you have conclusive results.

Now instead assume that the two ads look radically different from each other.  After 10,000 impressions, Ad A has 50 clicks and Ad B has 300 clicks.

Which ad is better? Because of the big difference, you can be very confident that Ad B will continue to perform better in the long run; there’s no need to spend more of your budget testing Ad A.

Here are a few examples of what I mean by big, dramatic changes:

Other free software that helps you run split tests & measure the results includes:

What Should I Do Next?

If you’ve never done any split testing, start by picking one thing to split test that you think might possibly have a potentially significant effect.  I suggest starting simple – don’t try to test everything right away because you can easily get bogged down.  Once you’ve seen some positive results from your initial test, you’ll be more motivated to continue testing & optimizing other aspects of your online business.

If you’d like to see the results of split tests that others have run, check out the case studies on these websites:

I hope I’ve convinced you that testing is worthwhile and have pointed you in the right direction to get started.

Justin Clark has been making money online for 5 years, specializing in pay-per-click advertising and affiliate marketing. To learn how to increase your website’s profits through split-testing, check out the free case studies on his site www.AdChop.com.

Split-Testing Ads: A Concrete Example of How It Saves Money in a Pay-Per-Click Campaign